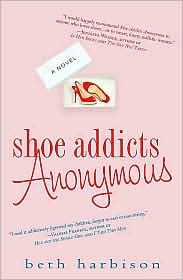 I picked up this book in the train station, Shoe Addicts Anonymous, because I was done reading my current book on the ride to the city.  If I had one word to describe this book it would be… FLUFF! I’m an avid fiction reader, but sometimes fiction still makes you think and ponder the possibilities.  There was none of that here for me.  It was an easy read.  I bought it on Monday evening, was done Saturday night and didn’t even read some every day.  The gist of the story is that there are four people who have a club dedicated to swapping shoes.  The idea started with Lorna, who is so deep in credit card debt that she needs to consolidate.  She works as a waitress and lives in a condo that is $1200 a month and still has time to shop for shoes and pay her other bills? UNREALISTIC in the  DC area! Anyway, after meeting her her “debt counselor” she places an ad on “gregslist.org” for a group to meet.  Other characters include Helene Zajaris, wife of a politician, who is unhappy that she’s been cut off from funds until she gets preggers by her hubby so he can have the perfect political family to tote around even though he’s a philanderer.  Next is Sandra.  Sandra is overweight and agoraphobic.  She makes her money being phone sex operator.  Thought that would be juicy but no.  She talks on the phone to a psychiatrist about her agoraphobia and she eventually goes to a hypnotist.  To get herself out the house, she goes to these meetings. She does eventually come out of her shell, realizes people are the big bad wolves and all that juicy stuff.  And Jocelyn.  She doesn’t even wear the size that they are swapping. She goes to thrift stores and finds the high-end shoes in their size to swap so she has a reason to get out of the house that she stays in.  She is a nanny and her boss is a mean bitch who demeans her and makes her do work not in her contract. Hence a reason NOT to be a live-in nanny.

Anyway.. the characters, while all very real parts of society, only touch on the surface of what these real life caricuatures could do.  I feel like yes, this is a great concept for a book, but the author always fell short of really pulling me in.  I could not lose myself in this book which is what i like to do when i read fiction books.  and as you all know I am a lover of shoes and books alike, so to combine the two was supposed to be heaven.  But instead they threw out name brands i coudn’t afford and stores I never heard of. What is Ormands anyway? Is that like the DC version of Saks? Sure, there were Guccis and Jimmy’s in there too, but not enough.  She also tries to make light of other cultural phenomenons, like ebay and her fake Craigslist, gregslist.com.  I enjoyed her concept but didn’t like the author’s, Beth Harbison, execution. And it all had such a fairy tale ending.  I don’t believe in fairy tale endings.  Not cool folks! Good Fluff reading.. would I recommend it to a friend,, probably  not.  This book doesn’t get a rave nor does it get a wtf.  It’s kinda just there.