I’m not an avid football watcher. I’ve tried over the years to get into it, but haven’t succeeded. In college I guess I would have considered myself an Eagles fan, but then after their failed appearance against the Patriots in Super Bowl XXXIX I haven’t considered myself a real fan. However, this year, in an effort to be more enthused about football (and able to actual use the TV at home on a Sunday) I’ve decided to
support the Eagles again. I feel that maybe I won’t fall asleep during the games if I’m actually rooting for someone! I also decided to root for them again for being the team to give Vick a chance. But that’s a story for another day.

Also, in my efforts to ‘enjoy’ football, I’ve become involved in Fantasy Football, which makes you care about the players. Last year, my rookie year, I played in 3 yahoo (free) fantasy leagues. I made the playoffs in all 3 leagues thanks to the help of all my male friends (go roomie!) This year, I’m currently at 3 leagues, with one being on FoxSports. This is the week that most leagues are having their drafts, and here are 2 of my 3 .. what do you guys think? 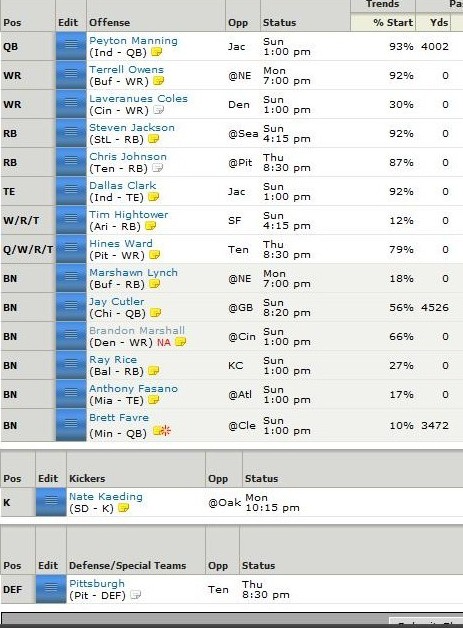 I’m very happy with Peyton as a QB, although I was aiming for Drew Brees. But he’ll do. and although I’m not a Favre fan, he is pretty dependable as a backup. I also have T.O who, even though he’s a big baby, he’s a good player. Let’s hope all goes well on this team. I’d like to make championship this year!
League 2: 14 teams 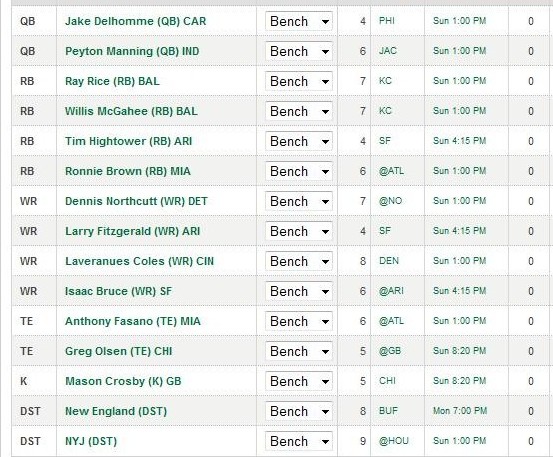 On this team I have Peyton and the #1 wide Receiver, Larry Fitzgerald, but my other positions are weaker. I wasn’t paying attention and drafted Ray Rice much earlier than I wanted to, passing up a better pick. Either way, there is still the trade to work with.

I’m definitely more confident in team 1 than team 2 .. We have to wait and see what happens with League 3, which is the largest league I’ve ever been in with 16 teams.

For those rookie Fantasy Leaguer’s out there, I have a few tips that might help you out.

1. Check out the scoring in your league. Not ever league scores equally. Some offer points for return yards, which can lead to big points. This will also affect how you draft. If you notice in my league, I have a lot more players. Different leagues let you start a different number of positions each game as well.

2. In the words of Mr. B – Running Backs win games. Almost everyone drafts a running back first pick in a draft. Almost!

3. Always check your bye weeks. You don’t want your starters and your back-ups to both be out the same week. Very important.

4. Best available player listed is not always the best player. Don’t fall for the popular pick.

5. Things change quickly! Please stay current on sports news. Don’t be stupid like me and draft someone on the teams suspension list!