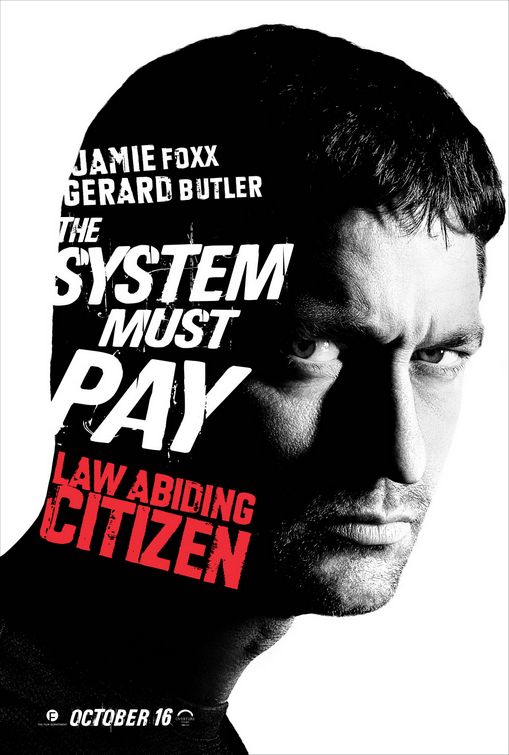 Man seeking revenge for the death of his family. Not a new concept, but it can always be redone. Clyde is a “normal” guy who’s wife and daughter are slaughtered in front of him. He attempts to let the justice system do its job, but is disappointed that the man who did it gets cut a break for snitching on his accomplice. Clyde is NOT happy with that, in fact he’s straight up pissed! Flash forward 10 years and he enacts his revenge, or his plot to fix the system.

Clyde is up against Nick Rice (Jamie Foxx). Rice is a good guy, but he’s typical DA material, more concerned with his conviction rate than actually doing justice. And that’s the plot in a nutshell. Clyde wants justice, not deals!!! And you better get it right, or you’re TOAST!

Ok, so just who is the Law Abiding Citizen in this movie? From the previews you think it’s going to be Gerard Butler being LAC but being devious at it, but as you continue to watch the movie you think Jamie Foxx is the LAC. So really, just who is it? I think the movie makers want us to be confused. They want to make you question, do your root for the “bad guy” or the guy who is just doing his job?

This movie was suspenseful, slightly gory (hello, his blood GUSHED out of his neck, and her brains were on the floor), and above all well written. Except the end, I do have some gripes about the ending because it could have been much better. I mean, Brooke McQueen (Leslie Bibb for those who don’t know) could have been so much better! Not that she was bad, but her talent could have been used in better ways, like she should have been trying to smash Nick. Then I’d believe her character, after all no one works hard and gets to the top these days!

Go See it, but not after you just ate.