So.. I reached a point where its time to break up with my phone. I will gladly admit that I’m addicted to my phone and its always within reach.. But after this weekend, I realize maybe I shouldn’t gladly admit that. 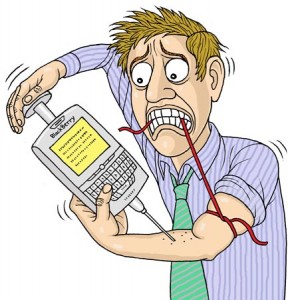 A slip and fall in the shower that resulted in bruising of my arm and a broken towel rack. Blackberry was ringing and I wanted to see who it was. Part of this anxiousness to see who it was, was due to the fact I was hoping it was a certain gentleman caller (it was not). So not only did I still answer the phone after the slip – while hanging half out the tub- it wasn’t a fully gratifying conversation. So now, I not only have no where to hang my towels my arms are still sore.  🙁  #fail . And I wasn’t home alone so there are people to bear witness to the tragedy of my clumsiness.

Moral of the story. Cut back on my blackberry obsession. Usually I don’t take it in the bathroom with me, and maybe there’s good reason.

Anyone else with a seemingly similar phone #fail?