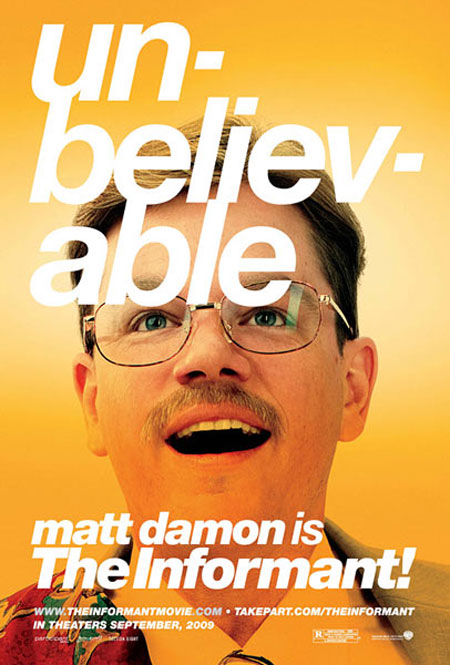 Matt Damon starred as Mark Whitacre in Steven Soderbergh’s newest. I kept seeing the previews and thought this would be a funny movie, how can it not be with a quote like, “Call me 0014, because I’m twice as smart as 007.” The movie was pleasantly funny.  The funniest parts to me are the Matt Damon voice overs. He goes off on random tangents about things like cheap ties.

Whitacre is a middle America exec of a corn company who has their product in everything in the early 90s. (High Fructose Corn Syrup anyone?) Marc doesn’t like how his company does business so he gets in cahoots with the FBI to bring them down. His ultimate goal is to be the “hero” and put the company back on track.

The funny part is that the FBI doesn’t seek out Whitacre, Whitaker goes to them. He starts this big elaborate investigation into the company and then begins to feel weird about it.  He tries to back out, but being that this is the FBI you just can’t. The movie follows Whitacre on this journe and eventually unfolds that Whitacre is involved in some shady things himself, but I won’t tell what.

My biggest problem with the movie, and this may be due to Soderbergh, is that it felt like I was watching Matt Damon’s character from the Ocean’s movies go on an extended undercover coup. In case you don’t know Sodergergh directs the Ocean’s series, so maybe that is why.

The guy who hosts E! TV’s The Soup was really good in this movie. And the wife, Ginger Whitacre, I know I’ve seen here before. But when I IMDB’ed her (real name Melanie Lynskey) I couldn’t place her in any of those things. Even though I saw Away We Go, I couldn’t place her character. She was also in a movie called Itty Bitty Titty Commitee!

All in all, I say go check this out on a lazy Sunday afternoon. It’s a good laugh when you need it.