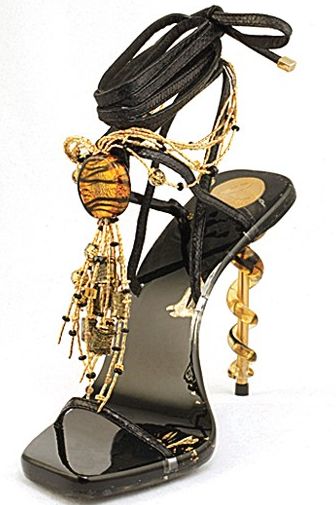 Pasquale Fabrizio, who is this UBER talented “shoe cobbler to the stars” has designed these glass slippers. I have never heard of Pasquale, probably since I’m not a star, but according to laweekly.com

He once built a three-legged monster costume for two 300-pound wrestlers. He fashioned a steel brace for the shared third leg, so that one wrestler standing inside the suit wouldn’t crush the other’s foot. He built up the calves of Angelina Jolie’s Jimmy Choo boots in Mr. & Mrs. Smith to make them thigh-high, and he swapped out the heels — 80 pairs at a time — so she could run around comfortably during stunts. He duplicated Muhammad Ali’s Everlasts — down to the tassels — for Will Smith, then, as Smith wore out their rubber soles from hours of practice in the ring, he resoled them. When Frank Darabont, the director of The Green Mile, needed the squeak removed from a pair of boots, Fabrizio came through … and did so again when Darabont changed his mind and wanted the squeak returned. One regular customer even implored Fabrizio to fix a Jacuzzi cover. The dog had chewed it.

WTH is Murano glass  you ask (because I did) its some super secret Italian way of making glass!! According to wiki, most Murano glass art is made using the lampworking technique. The glass is made from silica which becomes liquid at high temperatures. As the glass passes from a liquid to a solid state, there is an interval when the glass is soft before it hardens completely. This is when the glass-master can shape the material.

I’m not a 100% fan of the shoe, because I don’t like the thin strap across the front, but that heel design is TTIIGGGHTTT and I love the gold beads and ankle strap. BOMB!! Not that I have 7,500 to be spending on them anyway!