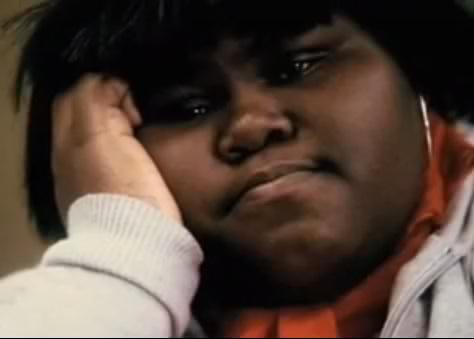 The other night I watched Precious: Based on the novel by Sapphire for the first time and man, this movie really was as sad as people sad.
I didn’t watch earlier because people kept saying how sad the movie was. Plus, I read the book many years ago and I’ve been fooled by other book ‘adaptations’ in the past. So I wasn’t eager. But the other night this movie was in my Top Recommendations on Netflix, so I laid down to watch figuring I’d fall asleep on it. But I didn’t.

I have to note, I vaguely remember the book-i remembered what it was about and how graphic it was, but not exactly HOW graphic or WHAT was graphic about it or WHY. When I told my friend I watched the movie and how I didn’t even feel the tears coming on (seriously, I was just watching nice and calm and the next minute tears were running down my cheeks by no effort of my own) she had some interesting insight. I’ve been pretty open with her about things in my childhood and growing up that I had to agree.

Verbally abusive parents: I grew up with my grandmother and while now I am appreciative of that fact growing up it wasn’t easy. Being called ugly, lazy, tramp or “just like your mother” when your mother is a drug addict are serious things to deal with as a kid/teenager. Being beaten with various household objects (cutting boards, brooms, blind handles) can leave scars-mental and physical. Realizing as an adult that your mom has a sibling jealousy toward you because you. While I think that things are good now between me and my grandmother sometimes when I look at her I see those things and resent them if I’m really honest with myself. Maybe that’s why I personally found the story of Precious to be sad-because the underlying message. One friend said the movie ended on a down note-it left no positivity. I had to disagree, if you listen to what Precious says as she leaves Miss Weiss’ office, she takes notes of her accomplishments, sets new goals for herself and has a determination to do better, as best as she can for herself and her children. My friend said, “but she’s fat, black, uneducated, single mother” and I think if you look past those things you see a person who hadn’t yet come out, who was trying not to be defined by what her circumstances had laid out for her. I saw some things I see in myself.

I used to be embarrassed about things in my past, such as a drug addict mother that I never wanted to discuss it. Now, even though I don’t go announcing it to strangers, I am more open to discussing it with some people. Oftentimes I make light jokes about ti, that some people don’t know how to handle, and I think in the past they were a defense mechanism I employed. Not to say I’m completely over my past or come to grips with everything, I feel I’m more at a point where I can grow from it versus letting it hold me back. I’m not the type to be held back.

One thought on “i finally watched Precious”