NO! Not that kind of Sex .. IDK that title just sort of came out when I went to type in the title field. .. usually titles are so hard to come up with for me, but sometimes they just flow.. So anywho ..

I spent the last weekend of September on my couch watching the first half of Season Six Part 1, all part two and the first Sex and the City movie. And as I was going to bed tonight, I was thinking about how no matter how many times I watch it, I never grow to love Jennifer Hudson’s character. That all you remember about her was her bad country accent and city naiveté she represents. Then it hit me. The characters from sex and the city, the people they interact with, they are caricatures. We aren’t meant to fall in love (or like) with them. But more so rather with how they interact with their main character. What they have contributed to their growth.

Take Trey. Aidan. Petrovsky. ShortComings Guy. Richard. Asshole Lawyer guy. They are ALL extreme caricatures of people we may encounter in life. They represent small parts but they are magnified in their small space on your TV screen. But all we are supposed to take away is the main characters pain or growth or whatever from them.

Am I making sense here?

So then Sunday I happened to be in ShopRite on Sunday and they had Sex and the City 2 for 4.99. Of course I bought it to complete my collection, and then immediately went home and ripped the packaging off to watch while I cooked. And wow. I really hate this move. OK, not hate, but to say I found it boring and a bit over the top would be accurate. The beginning sort of drags out and then it just feels forced. But anywho, this is not a movie review. SATC2, Aidan reappears. Aidan doesn’t reappear because the fans were disappointed to see him. Aidan reappears so we can see Carrie grow. Carrie needed to see Aidan to realize she was happy with BIG. Why do you think they don’t really discuss Aidan’s life after Carrie?

This blog HERE wrote about all the different men of SATC. And what they represent in our lives. How you can’t appreciate an Aidan unless you had a BIG and how Bergers are there to let us know, we will be OK.  And Petrovsky’s are a manifestation of every fairytale we’ve ever had and we get lost in because we believe we deserve it. Its a good read. I recommend it for the SATC lover in you.  Also note, that I think Carrie’s “cuteness” was greatly dependent on how she was “feeling” at the stages in development. I think she looked very pretty when dating Berger/Petrovsky, and even Aidan. But when it was season 2 or when she was cheating on Aidan? She looked downtrodden.  Our emotions control our looks. What do they say? If you feel good, you look good? HHHMMMM.. 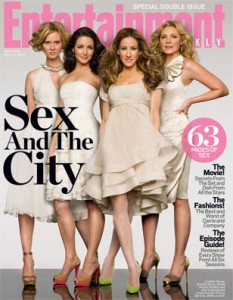 This is why SATC is really the best reality show that ever was. Who does not feel like they have been through a similar situation in dating that one of the girls had? I once thought I was dating Mr. Pussy. Well Jess did. I didn’t know what to think. Who hasn’t liked a guy but been turned off because the sex was bad (or his penis was too small? ?)

I think you get my point. I’d love input or discussion about it. Do you agree or disagree.