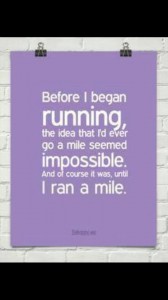 The quest to be fit and healthy for me often makes me feel like I am a hamster running on a wheel. I often don’t know where to start, how it started and what steps to take and what defines DONE. But in the quest for health and fitness there is no finite done. You keep going on maintaining health until death, or at least that’s the general idea, right? With so much information on health and fitness from thousands of sources, its kind of hard to pin point what your believe system should be on this.

So this year, I took up running. I saw this quote and it was so accurate. I never imagined myself as a runner, a jogger, or anything of that nature. However, somehow, this year I was able to put one foot in front of the other at a swifter pace than walking for mile after mile until eventually I hit this mark of over 10 miles. And for some, this isn’t a big deal, but for me this was significant.

The lesson I walked away from wasn’t just about running and trying to push, but about perseverance and prioritization. If YOU don’t make your goals, health and fitness, the focus who will? Everything requires continual dedication: happiness, dating, health, work. And sometimes these things will compete for what is important, but somewhere you have to find time for it all or you’ll continually feel like a hamster.

#2014orbust. I only have 3 months left and I’ve already backslid on some goals I set. But rather than give up I have to pick up the pieces and get back in the race. The tortoise just needed to finish, right?